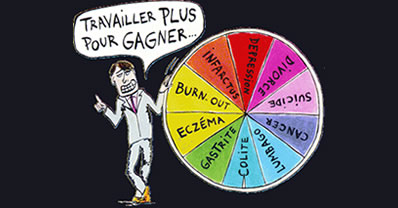 In 2013, employment minister Monica de Coninck launched a campaign to promote well-being at work with particular focus on the prevention of professional risks that are linked to the professional exhaustion syndrome better known as burn-out.

What is defined as professional exhaustion, characterised by intense physical and psychological exhaustion, generated by feelings of powerlessness and hopelessness and extreme distancing of one’s affects, remains however a modern evil that is just as unknown as the solutions that can treat it.

Burn-out manifests itself through certain behavioural problems with for example, excessive irritability or a state of intense exhaustion which are all reactions by the body when facing stress. Burn-out however, is very rarely discovered by the person themselves and is often only confirmed after an analysis and subsequent diagnosis by a psychologist or therapist in close collaboration with a doctor.

The structure of the work, the way in which it is organised or even the state of relations that exist between the employees are all factors that can lead to constant stress and ill-being. However, we could just as well blame society which values competencies above all else and then create a link between the lack of investment in your work and the lack of professional success.

At this point, it would seem sensible to do an analysis with a qualified professional that will look at their personal situation and their environment. OrientaEuro offers this type of service thanks to psychological counsellors who are experts on the issues linked to the professional environment.

Once diagnosed, the person is generally on sick leave. This allows them to distance themselves from the source of their stress: the professional environment, and be accompanied psychologically to allow themselves to rebuild both personally and professionally.

And you, what do you think about this? Leave your comments!