Among the students who have an active approach to choosing their studies and professions, most will come across a tool that is simple and accessible that can help clear up the vision they have of their future job: the guidance test.
The idea of surfing the net to try to find answers is a very common practice among young people and this is how they discover the so-called guidance tests. They are free questionnaires that claim to establish a professional profile and supposedly help the person discover what jobs would suit them best.

Although these tests are relatively practical because of their ease of use and accessibility, they are also badly adapted and even dangerous when it comes to helping you make descisions about your future.

First of all, there is the image that a person wants to give of themselves when they are answering a test about their personality and the test’s distorted interpretation of the results will tend to reinforce ideas they already had in mind. The tests will also have a tendency to ‘put people in boxes’ by only referring to stereotypes. The tool is not personalised. 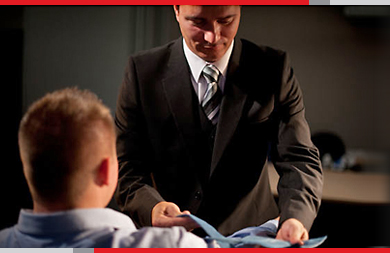 Some tests are nevertheless serious tools when it comes to measuring a precise variable (validation by an extensive public) but not always. They stem from psychological research whose analysis allowed certain behavioural stereotypes to be highlight. The tests are indeed scientific, so they have potential, but only as long as they are used as part of a comprehensive guidance process which is done with the help of a professional.

In a guidance process, the test isn’t automatically used, and even less so right at the start. It is only used for a precise reason. It can help with the diagnosis or helps provide answers about the teenager’s professional abilities. In this process, the counsellor helps the young person learn how to think things through thanks to different tools that enable them to think about themselves and to find different paths.

These may or may not align themselves with the ideas they had originally.

With our method, the teenager becomes fully self-aware and knows their interests and values through and through. They also see what their personal ambitions are with a lot more clarity. Amongst other things, the counsellors use a test based on Holland’s typology. This test gives them an image of what the big characteristics of their personality are and allows them to increase the spectrum of jobs that are adapted to them.

A test like this becomes part of a process and is used in conjunction with all the information touched on in the sessions, with the particularity that it proposes decision-making tools that the young person can keep for the future.

Either way, career guidance is an issue that has to be part of a process and does not consist of discovering a hidden talent with a test. It is making a link between an image and the way it works (the test) with the objectives, values, skills, talents and opportunities offered by the environment around you. The test can therefore be the beginning of the thought process, but it is not a thought in itself.