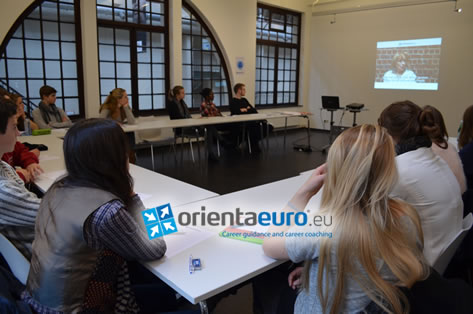 Thanks to our Intergenerational project “Seniors and Youth” we were able to indirectly liaise the Brussels teenagers with the Brussels Seniors via a series of short career advise movies.

The event took place on the 29th of October 2014 in OrientaEuro’s premises at Les Atelier des Tanneurs, Brussels, where during 2 hours 15 adolescents actively participated in the workshop. The activities touched upon three major axes of action: (1) self-knowledge, (2) external world and job market, and (3) the decision-making process.

During the workshop “Atelier d’Orientation vers les Études et Professions” focused on choosing the studies, among various games and assignments, two short movies of Josine and Eve, members of Senior centers run by our partner the Ville de Bruxelles in Laeken, were screened and followed by an animated debate.

Those movies were based on interviews with persons who have already finished their professional career and were willing to share with the young ones their opinions and views on talents, passions, income, job satisfaction, defeats, fears, success stories, career strategies, difficult life choices. Seniors, via those short movies, gave a wise and impartial advice on life in general, and how to make the best choices throughout life.

You can learn more about the “Seniors and Youth” project here.