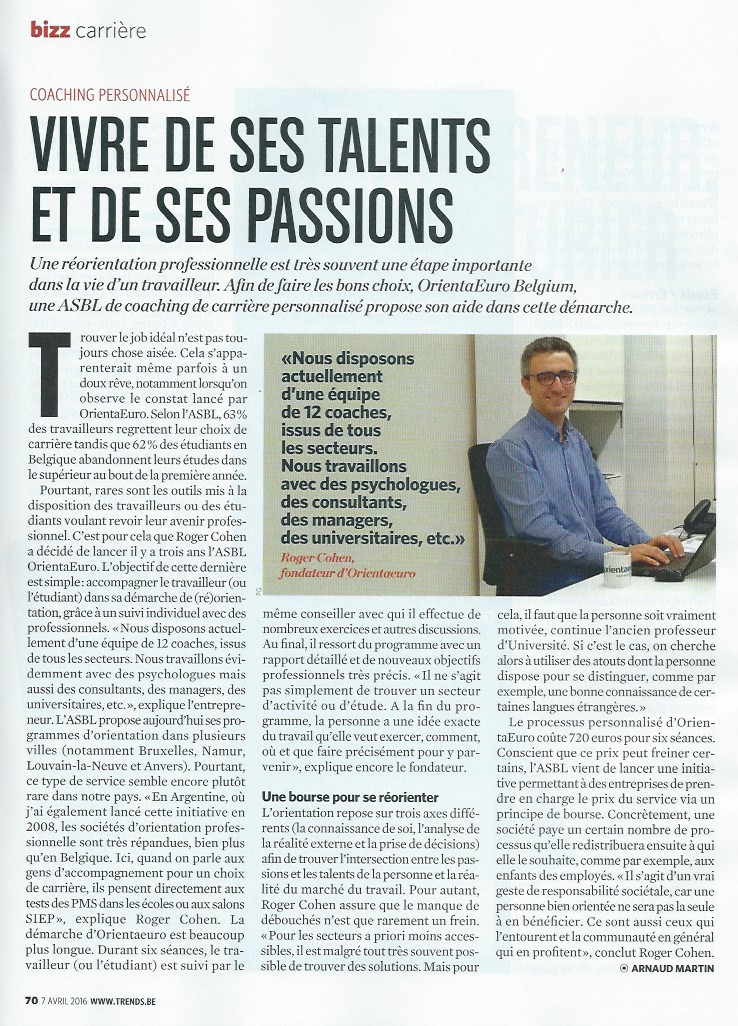 [headline style=’3′]Career[/headline] [headline style=’2′]”Make a Living out of your Passions and your Talents”[/headline] [headline style=’3′] Career reorientation is very often an important step in the life of a worker. In order to make the right choices, OrientaEuro Belgium, a nonprofit organisation specialised in personalised career coaching can help you.[/headline]
[headline style=’3′] Finding the ideal job is not always easy. Sometimes, it may even seem like an unattainable dream, especially when you look at the statistics put forward by OrientaEuro. According to the nonprofit organisation, 63% of workers regret their career choice whilst 62% of Belgian students drop out of university at the end of their first year. However, it’s rare for the workers or students to be given tools that could help them rethink their professional future.

That is why Roger Cohen decided to start OrientaEuro three years ago. The objective is simple: accompany the worker (or student) throughout their path of reorientation, thanks to individual follow-up with professionals. “Our team consists of 12 coaches at the minute, all of whom come from different sectors. Of course we work with psychologists but we also work with consultants, managers, academics, etc.”, explained the entrepreneur. Today, the nonprofit organisation offers its guidance programmes in several cities (Brussels, Namur, Louvain-la-Neuve and Antwerp). However, this type of service still seems relatively rare in our country. “In Argentina, where I also started this initiative in 2008, career guidance companies are very common, much more so than in Belgium. Here, when we talk to people about help with choosing a career they immediately think of the tests organised in schools by the Centres PMS or the massive career fairs”, explained Roger Cohen. OrientaEuro’s process is much deeper. For six sessions, the worker (or student) is guided by the same counsellor with whom they have many conversations and do numerous exercises.

At the end, the person completes the programme with a detailed report and very precise new professional objectives. “It’s not just finding an activity or study path. At the end of the programme, the person has an exact idea of the work they want to do, how, where and precisely what they have to do to get there”, explained the founder.

A (re)orientation grant
The guidance is based on three different axes (self-awareness , analysis of external reality and decision making) in order to find the intersection between the talents and passions of the person and the reality of the labour market. However, Roger Cohen insists that the lack of opportunities in the job market is rarely a problem. “Even in the less accessible sectors, it is nearly always possible to find solutions. However in order to do so, the person needs to be very motivated”, continues the former university professor. “If that’s the case, then we try to use the assets that could distinguish them from others, like knowing certain foreign languages for example”.

OrientaEuro’s personalised process costs 720 euros for the six sessions. Conscious of the fact that the price could be an obstacle for some people, the nonprofit organisation has just launched an initiative that allows companies to take care of the costs through a grant. This means that a company pays for a certain number of processes which they will then give out to whomever they choose, like their employees’ children for example.

“It’s a real act of societal responsibility because a well-guided person will not be the only one to benefit from it. The people around them and the community in general will also benefit from it”, concludes Roger Cohen.

Are you also interested in investing for a better society?